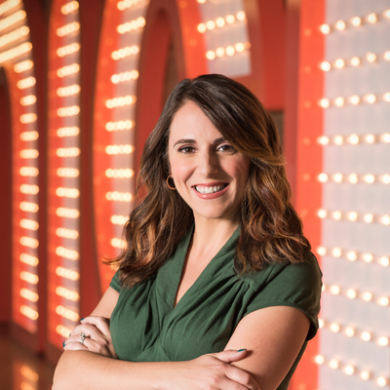 Claudia Spinelli is Nickelodeon’s Senior Vice President of Animation for Big Kids. In this role, Spinelli oversees the Development and Production of all animated content for Kids 6-11.  Her most recent projects include: Star Trek: Prodigy, Transformers:EarthSpark (which is being produced in a partnership with eOnes), the SpongeBob SquarePants spinoffs Kamp Koral: SpongeBob’s Under Years and The Patrick Star Show,  Big Nate, The Middlemost Post, and the Monster High animated series (produced in a partnership with Mattel).

Spinelli began her career at Nickelodeon in 2000 in Animation Development before expanding into Current Series where she oversaw the brand management of SpongeBob SquarePants, The Fairly OddParents, Jimmy Neutron and Avatar: The Last Airbender. As SpongeBob SquarePants grew in popularity, Spinelli was elevated to Executive in Charge (EIC) of the series in 2007. Throughout her career at Nickelodeon, Spinelli also served as EIC of Sanjay and Craig, Harvey Beaks, Robot and Monster, Get Blake!, Random! Cartoons, The Mighty B!, Making Fiends, and Planet Sheen, among others.

Spinelli’s work on SpongeBob SquarePants extended beyond the show as she has helped initiate projects throughout other areas of the company including: marketing partnerships with Macy’s Thanksgiving Day Parade; SpongeBob SquarePants theme park attractions; the franchise’s expansion into Social Media, video games featuring the iconic character; and SpongeBob SquarePants: The Broadway Musical, which garnered 12 Tony Award nominations.

Spinelli holds a Bachelor of Fine Arts in film from New York University. She also earned a Master of Fine Arts in Animation and Digital Arts from University of Southern California, where later she taught a class on Introductory Principles of Motion for Animation for the Interactive Media Department.  In between her degrees, she held a number of positions in various animation houses in New York City on commercials and short films.