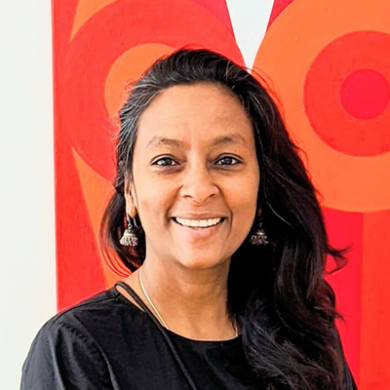 Saraswathi Vani Balgam is a Writer, Director and Creative Producer. Vani is also the founder of Dancing Atoms, a Los Angeles-based creative development studio that focuses on powerful storytelling that bridges the gap between Asian and North American storytellers.

She is currently developing multiple preschool animated TV shows in partnership with Canadian and American studios and is creating an original animated feature film with a Malaysian studio.

She is also an Unreal Fellowship Mentor and works closely with experts in using the unreal real-time pipeline for her preschool shows. One of her preschools shows “Gannu “ was selected by FIAPF & WIA for the Stories x Women Program & to be pitched at Annecy 2022.

She was also invited to be a part of Unreal engine ICVFX Unreal fellowship batch 2 where she spent time in intensive training & had had access to a wealth of technical knowledge related to ICVFX .

Previously in her career, Vani was the founding director of Rhythm & Hues Studios Asia, a multiple Academy Award® winning VFX and Animation studio. She also served as the Head of Creative Management and Training at DreamWorks Animation’s studio in Shanghai.

In Nov 2021 , Vani was a part of writing in the Unreal Tribeca initiative along with Epic games, as an associate producer alongside Karen Dufilho.

She has also successfully mentored the Sony Talent League members to structure their stories and make their dreams come true.

She actively promotes community building all over the world. She is currently the president of Asifa India, an organization dedicated to the art of animation. She also has been the president of Women in Animation – India for over 10 years.

Apart from this, Vani along with Asifa India partnered with Epic Games to launch the Women Creators Program in India with the aim to inspire and train women creators and form a community of creators.